I hear the same comments and arguments all the time “We can’t take everyone”, “They cost too much money”, “They are taking jobs away from us”, “They don’t want to integrate, they just want to come here and live from the system and change our way of life.” I always sit patiently and listen until the man or woman has let their frustration out about “they”, about the refugees, asylum seekers, and foreigners who are “taking over” Germany. Once they are finished I calmly say “I am also a foreigner, I am not German.”  The reactions are always mixed. Either that person who just got finished saying all foreigners should leave tries to make excuses or they don’t say anything at all. Why am I different from those men and women who have come here fleeing poverty, war, death, and terror? Why am I allowed to work, study, and live here without anyone telling me I should leave or protesting against me on the streets?  The answer is quite simple: I look German/European and speak three European languages.

When I first moved to Germany five years ago I had no problem assimilating. My German was very basic but no one had a problem speaking English to me. I felt comfortable right away, I came from a western country with Christianity as its main religion and looked exactly like the people around me. Once I learned German and began my Masters program people were shocked to learn I wasn’t German after they spoke with me as I didn’t seem different. The label “immigrant” never set well with me as I wouldn’t describe myself as one although technically I was. For the majority of my time living in Würzburg I never knew there were refugees and asylum seekers here. I had no idea that riding my bike for 15 minutes would bring me to the gate of the old American base where at full capacity almost 500 asylum seekers and refugees from 38 different countries lived.

Over a year and a half ago I stumbled across the Asylum student group at the KHG and went to one of their meetings. They had a group that organized a woman’s breakfast at the refugee house and I decided to check it out. I got on my bike and road the 15 minutes and stood before the gate. I had seen this place while passing by on the bus and had always wondered who lived there. There was no grass, it was surrounded by a fence, and seemed very dark and unwelcoming. I had always felt happy that I didn’t live there. Now I was entering that place I felt happy not to live in. Inside the fence was like the outside, dark and unwelcoming. I made my way to the breakfast and entered a room full of women speaking different languages. I was very nervous as I didn’t know what to say. A few Germans introduced themselves to me and explained that every Friday they met with the women, chatted, and had breakfast. The Germans provided the food, tea, and coffee and all the women had to do was come. I introduced myself to all of the women and found an empty seat next to a young woman from Uganda who was there with her son. I started speaking German and although her German was very good we quickly switched to English. Another woman came and sat next to us from Armenia and she shook my hand with a huge smile and welcoming eyes. By the time breakfast had finished I had spoken with women from all over the world: Uganda, Armenia, Somalia, Ethiopia, Cuba, and Afghanistan. I was hooked. I knew I had to go back. 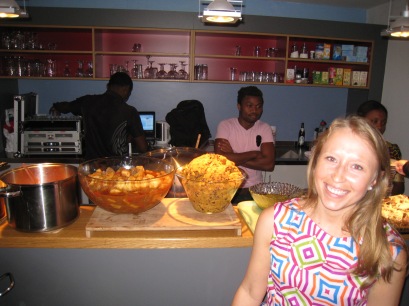 Every Friday I faithfully went to the breakfast and realized I knew nothing about the life of refugees and asylum seekers in Germany, or in general. I became “obsessed” with the topic so to say and tried to learn all I could. I became aware of the strong discrimination and ignorance towards these kind and welcoming women I had met. I met women who were doctors, teachers, photographers, business owners, professional singers, and housewives. Women who wanted to work, study, live out their lives but were denied that because of their status as foreigners, as refugees, as asylum seekers. I met women who had no choice but to leave their children and husbands behind, who had to send their children alone and were trying to get to them now, whose husbands, children, parents, family were killed. I met women who had seen death, destruction, violence, terror that I could never imagine. Women who walked through deserts and over mountains, women who rode in buses or in the back of trucks, who sailed in ships and tiny boats, and who took airplanes or trains to reach Germany. For the first time since living in Germany I realized I too was a foreigner. I asked myself, why do I have the right to live, work, and study here when they don’t? What is the difference between them and me? Why am I welcomed and they aren’t? I had the luck to be born with the right nationality.

Ignorance is a very destructive thing. It leads to racism, discrimination, and in the worst case violence. Ignorance leads to a country that describes itself as being built on Christian principles and morals to turn its back on those who need it the most. It causes people who call themselves good and who go to church every Sunday to close their doors and protest in the streets against people who have seen horrors that we only know from books and movies. It causes people who have been spoiled by living in a rich society to deny someone fleeing true poverty the chance to live out a life without worrying about how they will provide for their family. We must ask ourselves why we turn our backs on those who need us and why we deny someone the right to work and send them back to a life of despair and no hope? More people are informing themselves about the plight of refugees and asylum seekers and becoming involved. This cannot be ignored and through this positive changes have been made to the laws. However, with the rise of awareness has also come a rise of discrimination and protest. Every Monday across Germany people go out on the streets and protest against the Islamisation of Germany. Those protesting claim they are not against foreigners and are not racist but these sentences fall short when they are walking side by side with Nazis, when they make the argument that we cannot take everyone and the foreigners are just living from the system. Most of all for me the claims of not being racist are empty because they are not protesting against me.

No one chooses to leave their homes, their families, everything they know for no reason. No one risks their life walking through deserts, over mountains, or cramming into small boats just to earn pocket money. Those outraged by the swell of refugees coming to Germany complain that they don’t want to integrate, that the refugees just want to come here and take without giving. What bigger of a first step does one need to take than leaving everything behind to come to a country where you don’t know anyone? The first step was made the minute these men, women, and children entered Germany. Everyone speaks of integration but as soon as a refugee or asylum seeker stands at our door we shut and lock it. Why?

There are thousands of men and women who volunteer their time across Germany to help refugees and asylum seekers, but it is not their job alone. What picture does that paint of a society when those who come from war, famine, poverty, and terror are shut behind gates, tucked away in tents and containers on the outside of the city away from the eyes of normal citizens? There is something fundamentally wrong with the way asylum seekers and refugees are portrayed and viewed. We must ask ourselves why has it developed this way? Why are we not doing more? Why in a country that has known war, destruction, and the holocaust are thousands of people on the streets every Monday protesting against those who need us the most? I didn’t come to Germany because my country was destroyed by war, because I saw my family killed before my eyes, or because I was stuck in a vicious cycle of poverty and no future. My life wasn’t bad in my country of origin but I came to Germany because I knew my life would be better here, I came voluntarily while the majority are forced to come.

For me the most important question, and what gets at the heart of ignorance and discrimination in Germany today, is why am I allowed to live here, why do Germans complain to me about “those foreigners”, when in the end there is no difference between me and them? Why does the color of my skin, the language I speak, or the God I pray to decide if I am welcomed or not? We are all humans, we all feel love, anger, sadness, and fear. We all deserve to be treated with dignity and respect at our most vulnerable time. What does that say about me when I turn my back on someone who needs help and wants to be treated as a human with worth? We must ask ourselves if this is the kind of society we want to live in. If not we must begin to change it today. 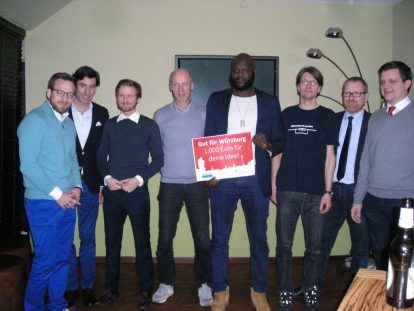